Travis Dillard, a Gorge native, and his wife, Jen Dillard, purchased the Honald Building in September of 2016 with the intention of converting the second floor into nine high-end, loft-style apartments.  They have secured the construction financing through MCEDD a 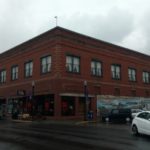 “Without Columbia Bank and the gap financing Eric Nerdin and MCEDD provided, this project wouldn’t be possible,” said Travis.  He continued, “This type of partnership is exactly what’s going to continue attracting investors into The Dalles.  The result being a renovated downtown corridor and a rejuvenated City.”

Travis and Jen, along with many others, believe that The Dalles is changing rapidly, for the better.

“Take a walk downtown.  You’ll see new breweries, coffee shops, restaurants, and other businesses popping up and thriving.  The historic downtown charm, coupled with abundant outdoor amenities, makes The Dalles an exciting place to live, work, and invest.  I believe higher-end downtown housing is crucial to The City and its next phase of progress,” stated Dillard.

The building was constructed in 1910 by the Walther-Williams Hardware Company.  It has been used as a hardware store, one of Oregon’s first automobile dealerships, a music store, and other retail uses.  The second floor was the Walther-Williams Apartments which have been unoccupied since the 1930’s. 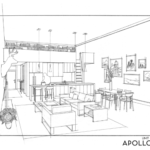 2nd and Federal Street.  It’s 10,000 Square foot first floor is the current home to local businesses, including KODL, Lilo’s Barbeque, The Wedding Shop, and other retail shops.  Up until now (demolition has been completed), the 10,000 square foot second floor housed the remains of the original apartments.

The final project will consist of three studios, five one-bedroom, and one two-bedroom apartments.  “We intend to reuse and restore as much of the original apartment materials as possible. This includes trim, flooring, slider doors, glass, and other materials,” says Dillard.  The apartments will boast historic charm along with all the expected high-end amenities.  This includes stainless steel appliances, washer / dryers, quartz countertops, restored double-pane windows, vaulted ceilings, abundant storage, and more.

“We’re very excited about this project.  There’s simply nothing like this in The Dalles.  We feel it will attract wonderful tenants whom will be happy to live downtown and benefit from everything The City has to offer, all in walking distance.”.  Travis added.

Through the North Central Oregon Attainable Housing Development Revolving Loan Program,  MCEDD offers flexible financing for housing development and housing rehabilitation in Hood River, Wasco and Sherman counties. The fund is designed to spur development of housing at rates affordable to those who live and work in the region (generally 60-120% of median family income).

MCEDD also has a Business Loan Program that is available to entrepreneurs, start up businesses and existing businesses doing business in the five county (Sherman, Hood River, Wasco, Klickitat and Skamania) Mid-Columbia Area.  Both of these loan programs are part of MCEDD’s efforts to strengthen and support the region’s economy.  Contact MCEDD at 541-296-2266 or loanmanager@mcedd.org for more information on  these MCEDD loan programs.