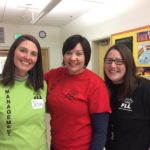 In December, teams from throughout the Gorge competed in robotics tournaments in The Dalles and Hood River. The FIRST LEGO League (FLL) robotics tournaments for students ages 9 to 14 were hosted by the Gorge Tech Alliance. Out of 50 teams from around the five-county area, 15 were chosen over the three day-long events to advance to the state competition in January. These events interest students in science, technology, engineering and math (STEM) and tie in well with the goals of the GTA to support STEM education. MCEDD staff was well represented this year! Jessica Metta serves as Tournament Director with Carrie Pipinich volunteering as Head Referee for the events in The Dalles and Jacque Schei volunteering as a Core Values Judge.

The Annual Gorge Tech Awards recognized Ryan Hartman as the 2017 GTA Technology Leader of the Year and Insitu Commercial Division as the 2017 Gorge Technology Organization of the Year. Ryan Hartman,President and CEO of Insitu, was honored as the 2017 GTA Technology Leader of the Year for his leadership of Insitu since 2014 which has grown significantly since then, for the corporate culture he has fostered, the work he’s done in acknowledgment of Insitu’s many ties to the Gorge community as a whole, his support of nonprofits and STEM education in the region. One outstanding finalist was also honored: Tom Furey, Chief Operating Officer of Sagetech Corporation, for his technical and company achievements, community outreach and leadership since joining Sagetech in 2015. Insitu Commercial Division was honored as the 2017 Gorge Tech Organization of the Year for their work on emergency response related to the September 2017 Eagle Creek Fire, the Fall 2017 California wildfires and the Hurricane Harvey response. Their work to pioneer the use of drones in the national airspace is keeping communities and first responders safer while improving the efficiency of emergency response efforts.